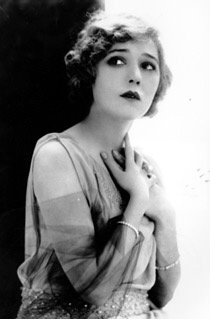 And, as so many of the stars from her era did, she has a cocktail named after her!

The Mary Pickford cocktail is made with rum, pineapple juice, cherry liqueur and grenadine. It was created by a bartender named Eddie Woelke, who fled to Cuba during Prohibition — like so many others in the profession who scattered to countries all around the world.

Mary Pickford was born April 8, 1892 and died May 29, 1979. She was a Canadian-American actress and a co-founder of the film studio United Artists. She was also one of the original 36 founders of the Academy of Motion Picture Arts and Sciences. You know, thee Academy!

She won two Academy Awards in her lifetime. The first was in 1929 when she won the award for Best Actress for her performance in Coquette. The second was in 1975 when she was presented with an honorary Oscar “in recognition of her unique contributions to the film industry and the development of film as an artistic medium.”

You can find her full filmography online here.

Combine all ingredients and shake with ice. Strain into a chilled cocktail glass and garnish with a brandied cherry.

In The PDT Cocktail book, author Jim Meehan gets a little more specific about brands. He cites the book Cocktails by Pedro Chicote, published in 1928:

Shake with ice and strain into a chilled coupe. No garnish.

The Mary Pickford cocktail was created by either Eddie Woelke, as mentioned above, or another bartender of the era. As with so with so many classic cocktails, there are multiple sources cited in the history of the Mary Pickford.

In his book Cocktails, Cocktails, and More Cocktails, author Kester Thompson writes that the drink was created specifically for Pickford during a trip which she took to Cuba in the 1920s with Charlie Chaplin and Douglas Fairbanks. The bartender he names as having created the drink is Fred Kaufmann.

Imbibe Magazine cites Woelke while Difford’s Guide names Kaufman (only one “N” though for some reason). Additionally, the Difford’s Guide article I linked doesn’t even mention Woelke, even though the piece does mention the El Presidente cocktail — which is the drink he’s best known for having created.

The blog Cold Glass has a nice write-up about the drink here.