It’s Jack Dempsey’s birthday today, which had me flipping through my copy of Mr. Boston for the recipe for the Dempsey Cocktail: 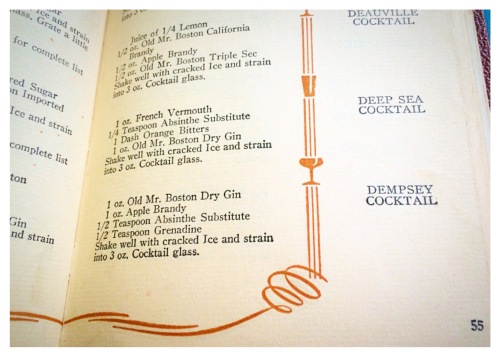 That pic above comes from the 1953 edition of the Old Mr. Boston De Luxe Official Bartender’s Guide.

I know Mr. Boston’s not the oldest cocktail book nor the most cited, but it’s the only one I have on hand that mentions the Dempsey Cocktail.

Who was Jack Dempsey? I didn’t know much about the man until I cribbed the following from Wikipedia:

He was an American professional boxer, who became a cultural icon of the 1920s.

Dempsey held the World Heavyweight Championship from 1919 to 1926, and his aggressive style and exceptional punching power made him one of the most popular boxers in history.

Shake well with cracked ice and strain into a 3 oz cocktail glass.